Apart from contributing to films and television series, De Ravin has also appeared on the cover of several magazines, including 944 and Entertainment Weekly. If you want to know more about the actress’s professional and personal life, read on!

De Ravin is an Australian actress. She was born in 1981 in the outer southeast suburb of Melbourne. As a child, De Ravin studied ballet at the Christa Cameron School of Ballet while her mother homeschooled her.

At the age of fifteen, Emilie got into the Australian Ballet School. Furthermore, she enrolled at the National Institute of Dramatic Art, Australia. After that, de Ravin moved to Los Angeles, where she attended the Prime Time Actors Studio.

Just one month after her big move, De Ravin landed the role of Tess Harding in the TV series Roswell.

Emilie’s breakthrough came in 2004 when she was cast as Claire Littleton in the popular drama Lost. The actress was a series regular and was seen in the first four, sixth, and the last season.

In 2006, De Ravin appeared in The Hills Have Eyes (2006), where she portrayed the role of Brenda Carter. Apart from that, Emilie also appeared in The Perfect Game and Public Enemies in 2009.

The same year, Emilie was cast for the starring role in the movie Remember Me. She portrayed the character of Ally Craig.

De Ravin was looped into a guest-star role in the first season of Once Upon a Time. She played the role of Belle and soon became the series regular.

After the completion of the sixth season, De Ravin, along with Josh Dallas and Rebecca Mader, departed the series. However, de Ravin later appeared in one episode of the seventh season. Besides, she was also seen in the series finale.

Emilie is a big-time foodie; however, she prefers eating clean, and her Instagram story highlight is proof.

She has shared various pictures that showcase her love for healthy food. These dishes include stirred-fried/baked tofu, gnocchi, vegan pita, along with yummy vegetables.

Emilie De Ravin has an incredible career and professional life, but her love life has been full of ups and downs.

Emilie and Josh Janowicz’s relationship was no less than a rollercoaster ride. The couple met in Los Angeles in 2000 and began dating. Josh proposed to De Ravin in January 2003 on their visit to Melbourne.

They lived in Burbank, California, along with their poodle.

In June, De Ravin and Janowicz tied the knot; however, six months later, the couple separated and reconciled within no time. But rumors of the couple’s separation resurfaced again in 2009, and it was reported that they had filed for divorce.

A few months later, De Ravin called the divorce off when she went to Japan with Janowicz. However, there was trouble in paradise once again, and the couple separated in 2013. De Ravin finally filed for divorce in 2014.

A year later, De Ravin started dating Eric Bilitch and confirmed the news of expecting the couple’s first child together on social media. She gave birth to a daughter and later announced her engagement with Eric Bilitch.

De Ravin and Bilitch welcomed their second child, a son, in 2018.

De Ravin loves to travel and hikes whenever she has free time. In addition to that, the actress ensures to go for walks with her little ones. We believe that’s how Emilie tries to stay active.

Emilie De Ravin has a petite body frame, but her ample bosom makes up for it! Her breast size is 34 inches, and her bra size is 34B with cup size B.

Emilie De Ravin and Robert Pattinson’s hot shower scene in Remember Me was jaw-dropping. While the duo was up for some action, Ravin’s cleavage raised the temperature even more!

Emilie De Ravin has several film and television series credited to her name. She rose to prominence for her role in the ABC drama Lost.

While the actress was busy outshining her peers, haters started speculating that the actress may have gotten fillers to make her lips look big and plump. However, Ravin has not responded to these rumors to date, so we can consider them false.

Emilie De Ravin has had an astonishing career right from the beginning. The actress has worked days in and out to get recognition. Emilie’s success can be measured by looking at the wealth she has accumulated throughout her career. As of 2022, she has an estimated net worth of $6 million.

Emilie De Ravin has worked with some of the most renowned actors, including Robert Pattinson, and her career has been nothing less than a spectacle. Follow along to read some fun facts about Emilie De Ravin.

Emilie De Ravin has been pregnant thrice in reel-life. She played the role of an alien who gets pregnant and leaves the earth before her bump starts showing in Roswell. Additionally, she was pregnant in Lost and Brick.

Emilie once carried her pet cat to the airport. When the customs department checked if it was alive, her cat was in a deep slumber and didn’t wake up for a few seconds, which made the actress nervous and awkward at the same time.

What face shape does Emilie De Ravin have?

Emilie De Ravin has a rectangular-shaped face. While her big blue eyes are a trademark, her high forehead and chiseled jawline add more beauty to her face.

Emilie De Ravin is a natural blonde. However, she dyed her hair dark brown while filming for the role of Belle in Once Upon a Time.

What color eyes does Emilie De Ravin have?

Emilie De Ravin has gorgeous blue eyes, one of the most distinct features on her face. The color of her eyes reflects Ravin’s innocence which can easily be seen in the roles that she typically plays.

Does Emilie De Ravin have tattoos?

No, Emilie De Ravin doesn’t have a tattoo.

Emilie De Ravin was born in Victoria, Australia. However, she moved to Los Angeles when she was 18 years old in search of better opportunities.

Where does Emilie De Ravin live?

Emilie De Ravin and her partner, Eric Bilitch, divide time between Los Angeles and Australia. The couple has two children together.

Emilie De Ravin is an Australian actress who made the big move to Los Angeles to anticipate better opportunities. The actress made her dreams come true and starred in several well-known projects. Ravin reminds us of Emilia Clarke, who looks wonderful when she dyes her hair blonde. 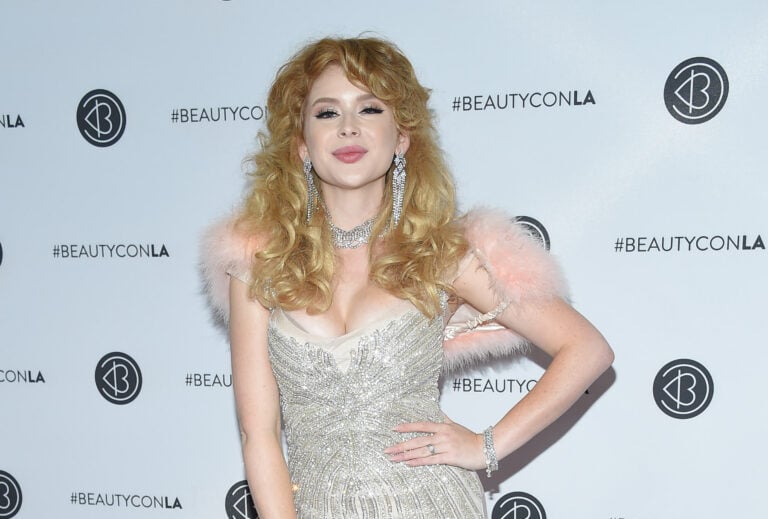